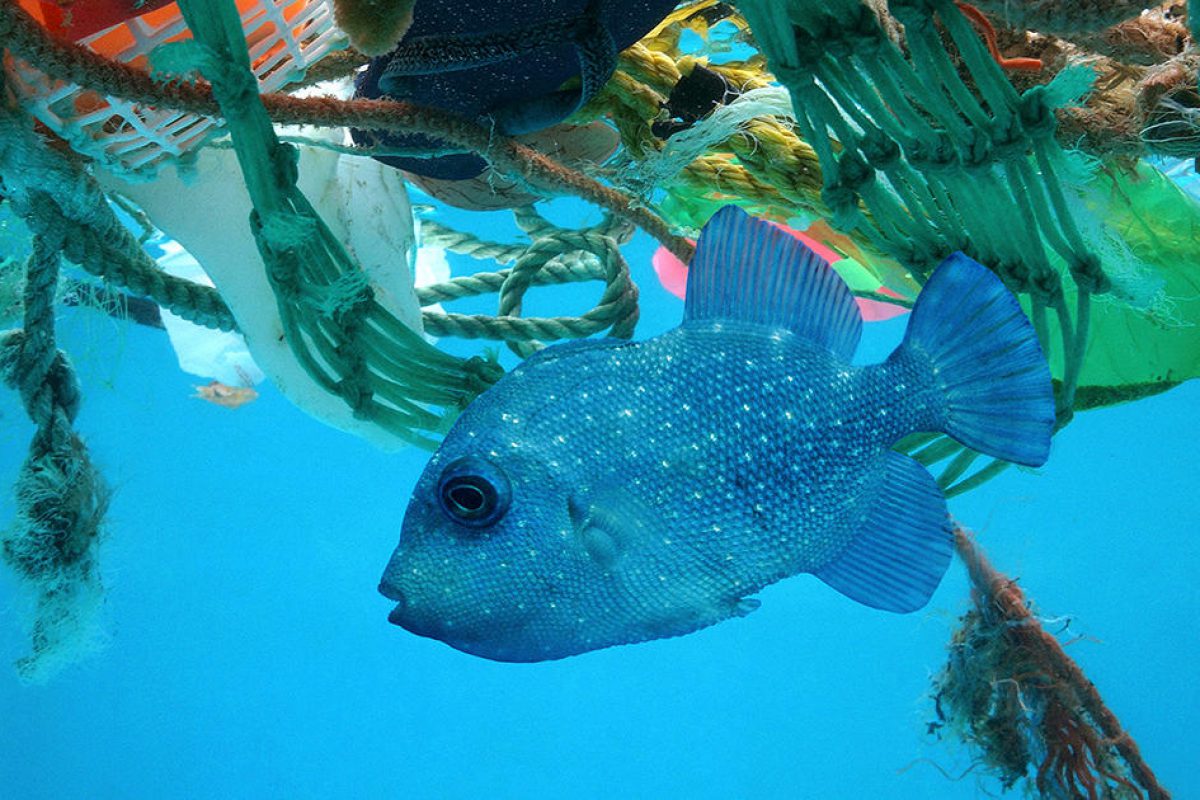 Ocean water covers more than 70 percent of the Earth, and only in recent decades have we begun to understand how humans impact this watery habitat. Marine pollution, as distinct from overall water pollution, focuses on human-created products that enter the ocean.

The London Convention, ratified in 1975 by the United States, was the first international agreement to spell out better protection for the marine environment. The agreement implemented regulatory programs and prohibited the disposal of hazardous materials at sea. An updated agreement, the London Protocol, went into effect in 2006, more specifically banning all wastes and materials except for a short list of items, like leftover materials from dredging.

Many of these pollutants sink to the ocean’s depths or float far distances from their original source, where they are consumed by small marine organisms and introduced into the global food chain. Marine pollution encompasses many types of pollution that disrupt the marine ecosystem, including chemical, light, noise, and plastic pollution.

Many ocean pollutants are released into the environment far upstream from coastlines. Nutrient-packed fertilizers applied to farmland, for example, often end up in local streams and are eventually deposited into estuaries and bays. These excess nutrients trigger massive blooms of algae that rob the water of oxygen, leaving dead zones where few marine organisms can live. Some chemical pollutants climb high into the food webs—like DDT, the insecticide that placed the bald eagle on the United States Fish and Wildlife’s endangered species list.

Scientists are starting to better understand how specific pollutants, leached into the ocean from other materials, affect marine wildlife. PFAS, a chemical incorporated into many household products, accumulates in human and marine mammal blood. Even pharmaceuticals ingested by humans, but not fully processed by our bodies, end up in aquatic food webs.

Since the invention of the lightbulb, light has spread across the globe, reaching almost every ecosystem. Often thought of as a terrestrial problem, scientists are starting to understand how artificial light at night affects many marine organisms.

Light pollution penetrates under the water, creating a vastly different world for fish living in shallow reefs near urban environments. Light disrupts the normal cues associated with circadian rhythms, to which species have evolved timing of migration, reproducing, and feeding. Artificial light at night can make it easier for predators to find smaller fish prey and can affect breeding in reef fish.

Pollution is not always visible. In large bodies of water, sound waves can carry undiminished for miles. The increased presence of loud or persistent sounds from ships, sonar devices, and oil rigs disrupts natural noises in the marine environment.

Plastic pollution seeps into the ocean through run-off and even purposeful dumping. The amount of plastic in the Atlantic Ocean has tripled since the 1960s. The garbage patch floating in the Pacific Ocean, almost 620,000 square miles—twice the size of Texas—is a powerful image of our plastic problem.

A huge culprit is single-use plastics, used once before tossed into the trash or directly into the ocean. These single-use items are accidentally consumed by many marine mammals. Plastic bags resemble jellyfish, a common food for sea turtles, while some seabirds eat plastic because it releases a chemical that makes it smell like its natural food. Discarded fishing nets drift for years, ensnaring fish and mammals.

Bits of plastic swirl throughout the water column, even sinking to the deepest depths of the ocean. Scientists found plastic fibers in corals in the Atlantic Ocean—and more concerning, they found that the corals readily ate plastic over food. Dying marine mammals, washing up on shore, also contain plastic inside their stomachs.

Is there a “fix” to marine pollution?

Many national laws, as well as international agreements, now forbid dumping of harmful materials into the ocean, although enforcing these regulations remains a challenge.

Many pollutants still persist in the environment, difficult to fully remove. Chemical pollutants often cannot be broken down for long periods of time, or they increase in concentration as they move up the food web. Because plastic is thought to take hundreds of years to break down, it poses a threat to the marine environment for centuries.

Isolated efforts to restore estuaries and bays have met with some success, but pollution gets trapped in marine sediment and makes complete clean-ups nearly impossible.

Moving forward, encouraging recycling and reuse can minimize plastic pollution. Dampening unnecessary lights at night can limit light pollution. And encouraging responsible chemical-use through consumer and political actions can protect the environment for the future.

We use cookies on our website to give you the most relevant experience by remembering your preferences and repeat visits. By clicking “Accept All”, you consent to the use of ALL the cookies. However, you may visit "Cookie Settings" to provide a controlled consent.
Cookie SettingsAccept All
Manage consent

This website uses cookies to improve your experience while you navigate through the website. Out of these, the cookies that are categorized as necessary are stored on your browser as they are essential for the working of basic functionalities of the website. We also use third-party cookies that help us analyze and understand how you use this website. These cookies will be stored in your browser only with your consent. You also have the option to opt-out of these cookies. But opting out of some of these cookies may affect your browsing experience.
Necessary Always Enabled
Necessary cookies are absolutely essential for the website to function properly. These cookies ensure basic functionalities and security features of the website, anonymously.
Functional
Functional cookies help to perform certain functionalities like sharing the content of the website on social media platforms, collect feedbacks, and other third-party features.
Performance
Performance cookies are used to understand and analyze the key performance indexes of the website which helps in delivering a better user experience for the visitors.
Analytics
Analytical cookies are used to understand how visitors interact with the website. These cookies help provide information on metrics the number of visitors, bounce rate, traffic source, etc.
Advertisement
Advertisement cookies are used to provide visitors with relevant ads and marketing campaigns. These cookies track visitors across websites and collect information to provide customized ads.
Others
Other uncategorized cookies are those that are being analyzed and have not been classified into a category as yet.
SAVE & ACCEPT

Send us a Enquiry. Our team will get back to you soon.